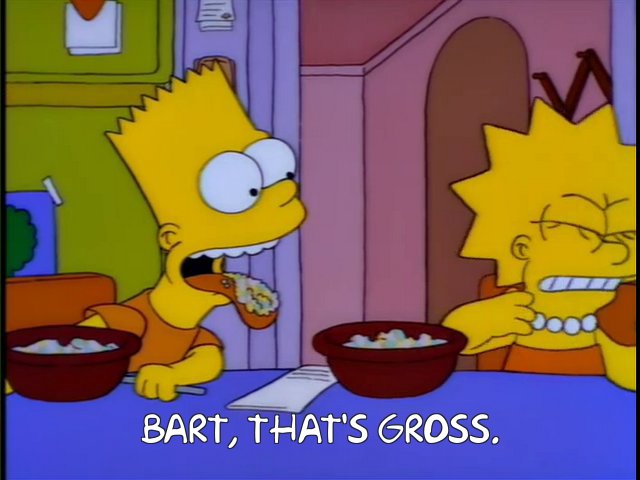 One assumption,  often unstated, in the economics we teach at the introductory and intermediate levels is the absence of force. Another assumption that we typically take a while to unpack is the rule of law and property rights. And still a third assumption is the cultural context of what is fair game to be traded in a society. I want to talk a little bit about where they show up in the context of two key ideas in the undergraduate-level canon, general equilibrium theory and externality theory.

A general equilibrium story. You pop into existence in the woods, alone. You wander. You find a stream and manage to catch some fish. Later, you come to a clearing in the woods, and, at last, you see another person! It’s me! I popped into existence at the other side of the woods, found and picked a bunch of berries, and wandered on, eventually coming to the same clearing.

You’re sick of just fish, and I’m sick of just berries. I swap some of my berries for some of your fish, and hey presto, we each have a balanced diet and we each are better off. Or maybe you hate berries and decide not to swap. That’s fine too! The point is that we might be able to both be happier by having met each other. That’s the story of trade.

General equilibrium theory asks a very tricky little question. Can we replicate this nice outcome of trade in a world that doesn’t need us to bump into each other in a clearing in the woods? Consider two institutions. First, a super-smart, super-powerful benevolent dictator who knew what we all liked and wanted us to be happier. He moves around stuff using his superpowers, taking stuff from each of us and giving it to the other, and we are each happier. (We may also ask what “benevolent” meant a couple sentences ago, and then we are about to start thinking about social welfare theory.)

A second institution. A bureaucrat in the sky erects a wall between my side of the clearing and yours. He installs a trading post on each side, and posts numbers called prices: you can sell this type of thing for this much, and sell that type of thing for that much. We each decide, independently, how many berries and fish to sell and how many berries and fish to buy with the proceeds. The bureaucrat’s job is to come up with numbers—prices—so that what I want to buy and sell matches up with what you want to sell and buy.

Do these stories work as analogies for a centrally planned economy? For markets? It gets more complicated, of course. There are lots more people, and lots more goods. Maybe you are a producer, who wants to get labor and berries and sugar and machines to make jam, which you can sell to afford other stuff…

So wait. Where is the sneaky assumption? Let’s tell a different story. We meet at a clearing in the woods, each with our armload of stuff. You have a big stick. You hit me on the head with the big stick and take my stuff. Assuming you feel no remorse, you are quite a bit happier than you were before, and I am quite upset indeed.

This is probably not a bad model for a lot of human history. Maybe not an entirely unfair reading of some aspects of the present, for that matter. The economy as reduced to the ownership of the biggest stick. But notice that our little story dodged that institution, the institution of violence and war. Is that naive, or noble? Will violence render our story moot? Are there norms or laws to stop it? What work do we need to do to square the peaceful story with the government’s monopoly on the legal use of force?

The rule of law runs deeper than “can you freely steal my stuff”, of course. We can think in particular about contracts, formalized trust, especially when we start to think about information economics and the need for recourse if you break your word to me. This type of thing typically appears later in an intermediate course than the exposition of equilibrium theory, which can obscure its importance a bit. The connections can be productively emphasized sooner, I think.

We can also think about the role of property rights: are they my berries in the first place? Do the institutions we are telling stories about require or preclude property rights?

Another deep question that floats around the fables of trade is existential. If trade is so great, should everything be fair game?

The answer is heavily dependent on era and culture. People, bits of people (organs, blood), some drugs, sex, alcohol, some animals, some bits of animals, some numbers… all tradeable and traded but, at various times and invarious places, prohibited from trade. Slavery continues to exist in the world, despite institutionalized rejection of it, and yet no economist, no matter how much they believe in the power of markets to benefit both buyers and sellers, is going to advocate that slavery enhances wellbeing.

This is a particularly stark example of something that I think economics, as a discipline, can be very proud of. We have long refused to budge from the position that the wellbeing of all people, regardless of identity, deserves equal consideration in our thinking. This goes back to at least the coining of the notorious epithet “the dismal science”: Thomas Carlyle considered economics “dismal” precisely because it considered all people equally. Go figure.

But the edge cases get trickier. Alcohol and drugs force us to consider the ethics of paternalistic policy, animal rights the wellbeing of other species. Into this breach comes culture and social norms. Our debate begins to blur with the debates over, for example, personal agency and minority rights, for example in the cases of gay marriage and transgender rights. Organ trading is another tricky case that requires us to consider where the line between incentive and coercion lies, whether we can ever tolerate a world that allows a person to literally sell themselves to feed their family.

What about labor, the ultimate input? Is the sweat of my brow tradeable? Do we have the right to sell our time and effort? A common reflex among my students is to consider the modern, hybrid state-market economy we live in to be coercive—the analogies of wage and debt slavery, for example. Relative to what, one may fairly ask, seeking a way to square the ubiquity of constraints in a world of scarcity with a desire for maximal personal agency.

Externality theory considers the following question: what if my choices distort your possibilities? A typical modern textbook treatment of externality theory frames this as an issue of missing markets: something that is not traded. The idea is that if the thing I was doing is fair game for trade, we could buy and sell my doing of it and arrive at an agreement that would benefit both of us as compared to the situation in which I considered only myself. And so it is a natural and necessary place to explore the cultural ideas of commodification and its limits.

Revulsion and taboo, I think, are useful bridges between literary cultural criticism and economic theory, of the type I was thinking of in my recent post about literary interpretations of economic models. There is a productive—and in our Trumpist 2016, present—connection between body-horror disgust and authoritarianism, as discussed, for example, by Sarah Jaquette Ray in “The Ecological Other”:

I do not see this simultaneous distaste for dirt and obsession with environmental purity (or absence of dirt) as paradoxical. On the contrary, I agree with many critical environmental scholars that environmentalism’s focus on maintaining a pure nature is as much about social order as it is about ecological health.

In our current political context, we see a presidential candidate who is germophobic and disgustful—openly and publicly revolted by babies, menstruation, sweat, urination—while simultaneously being authoritative and ethnocentric. I think the boundaries of trade, rights, and norms that are implicit in our textbook economic theories reflect a powerful connection between these forces.

And so again I say, why wait to make these connections? The introductory and intermediate economics classroom can serve our students better by raising these inherently interdisciplinary questions. I think that students, as opposed to researcherss, are potentially our hidden assets in fostering a stronger dialogue between economics and other social sciences and humanities. We can support them from an earlier stage even with only very small adjustments and extensions to how we are already teaching.

Further reading: for more on repugnance in economics, the seminal work is by Al Roth who has collected many links to discussions of his work at this link.