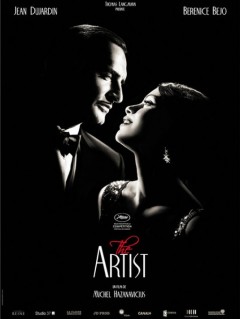 “The Artist” of the title is, I presume, George Valentin (Jean Dujardin), a silent film actor in the late 1920s, about to be rendered obsolete by the talkies. He isn’t much of an artist. Dujardin’s brilliant mugging as he acts the actor acting (if you see what I mean), his identikit pictures, his glamorous swagger: this is a star, and Hollywood is an industry. Michel Hazanavicius’s silent, black-and-white homage to the era uses great craft to pastiche an era when the craft was a little less sophisticated.

Before sound arrives and the silent industry collapses, Valentin, at a premiere of his latest movie, literally bumps into Peppy Miller (Bérénice Bejo), who is in the mass of fans outside the theater. Their chance meeting is splashed over the gossip pages. That, of course, will not be that. She is hired as a dancer for Valentin’s latest feature; when she is recognized as the troublemaker from the newspapers, she is saved from being fired only by Valentin’s intervention.

This first act was my favorite by quite a margin. Later there is classic melodrama, but first we have classic comedy. The stylized black-and-white, silent nostalgia worked a lot better for me in service of the light romp of the preening star than the descent to come later. And it does work. Dujardin and Bejo look just right, and survive perfectly well without words. For some reason I think Valentin and Miller’s cute-as-a-button spark as they catch the giggles while trying to film a scene would have been much less sympathetic with sound.

Valentin is about to pass Miller on the way down, as the talkies will launch her to the top just as they cast Valentin aside. Their moment together is past unrequited, with Valentin returning to his distressingly complete alienation of affection for his wife, and Miller whisked off to stardom. It’s lucky that the brief scenes of their meeting work so well, since they have to carry the weight of the two stars’ opposing fortunes as well as the affection the two clearly feel for each other.

What kind of affection is not clear. Maybe by the Hays-code constraints of the movie’s style, chastity is unbreakable? In this way the constraints bleed into the action, and I found myself wondering if there was anything we weren’t seeing. Valentin descends – at length – into booze and despair, and Miller works occasionally to help him, silently so as not to hurt his pride, but the precise why stays unknown. I thought as the pace settled down while Valentin falls, the stylistic facade seemed a little less convincing. An homage to comedy still gets to tell jokes after all.

It seems to be that pride that does Valentin in, but again I wasn’t sure exactly why. At the moment his fortune turns, Valentin’s producer Al Zimmer (John Goodman) shows him a screen test of an actress with sound. Valentin leaves, laughing. Is he being forced out of the industry, obsolete, as Zimmer claims later? Or is he walking through the door alone, refusing to ride this new wave, unable or afraid? At times it seems to be him, and at others the world. I suppose things always seems a little that way when things are going badly.

In any case the movie certainly doesn’t seem to take a stand one way or the other. Which is fine; “The Artist” is a sweet confection, not an exercise in whys. To revel in the sights, sounds and mechanics of a bygone era seems to be the goal, and the material itself is very much a square peg for the square hole of the style. I wonder whether the same nostalgic style could ever work with something a bit more complicated, or if the medium really constrains the possibilities of the story. Does silence restrict a movie to simple emotions, or does everything just look simpler in silence?

The three people at the center of David Cronenberg’s “A Dangerous Method” aren’t a love triangle in the traditional sense, but their relationship is just as messy. The movie follows the fathers of psychoanalysis, Sigmund Freud (Viggo Mortensen) and Carl Jung (Michael Fassbender), and Sabina Spielrein (Kiera Knightley), patient and later lover of Jung, still later patient of Freud, still later student of both and a renowned psychiatrist in her own right. It’s a complicated path.

The movie opens with a screaming and resistant Spielrein, daughter to a wealthy Russian businessman, being committed to a psychiatric hospital. There she meets Jung, who explains that he will try the new “talking cure”. He sits behind her, so as not to distract her, he says: Knightley then is facing us directly, her face filling the screen, with Fassbender behind. As he questions her, her face contorts and her voice whispers and shrieks – the performance is almost over-the-top and certainly uncomfortable to watch, which I suppose is the whole point.

We cut to Jung and Spielrein strolling the hospital grounds, talking on much the same basis as in the treatment room. But wasn’t Jung supposed to be out of sight during the treatment? What could be going on here? It immediately seems inevitable that Jung and Spielrein are certainly not going to be just doctor and patient. Surely Jung can see this too; for him to insist on being in the background at one moment and to talk on equal footing the next seems to ask for trouble. Either there will be heroic compartmentalization or things will get complicated.

Eventually the two will indeed become lovers, even as Jung’s wife produces a series of children. Their affair will see Spielrein satisfying the fetishes that were exposed by her talk therapy and that she had believed were wrong and made her dangerous and broken. Jung seems tawdry by comparison. Despite some hand-wringing about whether it is right to explore or repress base urges, ultimately his motivation seems to be the obvious one. Either way it was a little surprising to hear the two of them talk later in the movie about their outsized love for each other; at times there didn’t seem to be a lot between them.

Against all this, Jung and Freud are meeting for the first time and developing a personal and professional relationship. Freud praises the younger man as the heir to the throne; Jung calls Freud a father figure. But Freud, with Mortensen showing him judicious and logical, believes in strict and narrow psychoanalysis, concerned with the perception of their new field from outside. He seems to be a marketer and frames his favoring of Jung as a way to give the profession a face not of the Vienna Jewish community. Jung interprets these not as political acts but as evidence that Freud is no longer an innovator. He wants instead to promote a broader psychoanalysis, one that includes things that Freud sees as unscientific at best and superstitious at worst. Their polite parrying darkens as time goes on; my favorite scenes of the movie were those with Mortensen and Fassbender alone, the gentle tension between them ebbing and flowing.

But in the end for all the talk in the film, the difference of opinion between Freud and Jung is not really explained in great depth. Their relationship really breaks down in the regular fashion, no matter how much they try to cover the rift with the fig-leaf of intellectual disagreement. Jung’s relationship with Spielrein colors their arguments and, when Spielrein forces Jung to reveal it to Freud, disappoints the older man. Fassbender, in Jung and in his other recent starring role, seems to have nailed down playing ashamed, although here it not because of the sex itself but the deceit. Jung seems to be unable to address his desires. As he fights Freud’s belief that the root of all patients’ problems is sexual, the affair with Spielrein frays his nerves.

To complete the triangle, after their affair is exploded, Spielrein demands that Jung recommend that Freud take her as a patient. She seems unleashed by Freud’s method and her affair with Jung from what had been debilitating illness, and is now training to be a psychiatrist in her own right. With Freud as a pivot, the doctor and patient are in the process of switching roles, he ruined and on the verge of a nervous breakdown after losing his young mistress and his mentor, and she developing Freud’s work in new directions, impressing the old man in the role he had earmarked for Jung. In the end it is Spielrein who is the strong and confident center, against the aging Freud and the crumbling Jung.