Dodgy economics is flying around left and right as the new GOP health bill is being piñata-ed from all sides this week. One particular strand is the charge of economism in the political rhetoric around healthcare. I want to talk a little about that since it relates to the teaching of introductory economics. In sum I want to claim that there is no great crisis in econ 101 being reflected here, but that there are reasonable grounds to suspect that marginal changes could have a big impact in how the median econ 101 student absorbs our material.

First, let me pause to celebrate that the word economism is hustling into the discourse. I highly recommend James Kwak’s book to all the economics educators out there. I think it is a really helpful prod to think critically about our messaging, especially since, as I’m about to argue, I think a lot of us think we’re in the clear because econ 101 is a lot more nuanced than it’s caricatured to be. 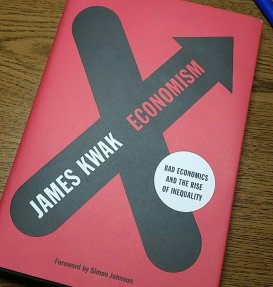 Econ 101 is quite clear on the way healthcare is different than other goods, in ways that make an unrestricted free market a very poor way to allocate it. I say poor here meaning both relative to other ways to allocate healthcare and relative to how well unrestricted markets perform in allocating some other types of good. “Poor” is normative, but I think that this claim is not super controversial. It is absolutely a canonical case of market failure, back to Arrow and Akerlof, among the myriad others. This is literally two weeks away in my econ 101 class this semester.

The history of health policy I think reflects this broad consensus, up to and including Romneycare.

So now we have the House GOP introducing a bill that has received a frosty reception from pretty much all quarters, and so we watch Congressional Republicans and the White House search for a way to justify and defend the proposed legislation. Paul Ryan’s statement went for the touchstone of the “free market”, while Sean Spicer went for a, dare I say, more nuanced approach that said that how many people are covered is not the important thing, but rather the quality of healthcare for those who are covered.

The Congressional GOP language generated this conversation on Twitter:

At the risk of being nauseatingly magnanimous, everyone here has it right, at least a little. In reverse order of how difficult that statement is to justify: Justin Wolfers correctly calls on the econ 101 canon, which most definitely includes market failure and policy nuance; Chris Hayes calls on the language used by the GOP spokespeople, which undeniably reflects jargon from econ 101 if not necessarily the actual material; Jeet Heer calls on the reception econ 101 gets from its students.

What gives? Economism is multifaceted. Jargon, words, and language are created in econ 101 classrooms, and, for better or for worse, some of those same pieces of jargon are coming out of the mouths of the defenders of the GOP health bill. This works as an appeal to objectivity, rationality, and authority—the argument is not the argument, the jargon is the argument. “It’s economics, stupid”, except it isn’t, it’s co-opted language.

Then we get Spicer, who one can read as doing a health care trolley problem out loud at the White House podium: if one person loses their healthcare, but another person gets better healthcare… that’s good? Is that good?

This would be a smooth fit with the econ 101 straitjacket of dollar-utilitarianism, which I have written about before. This is a particular piece of jargon: efficiency. Yes, the textbook always says we need to think about efficiency and equity. But efficiency is ever-present. It is right there on the surface of supply and demand and our analysis of market failure. Equity requires our students to go behind the supply and demand curves and outside of the model on the page. That is possible and necessary, but also hard and forgettable. And often not on the test!

Oh, and how did we get away with reducing moral philosophy to “efficiency and equity”?

Language is memorable, nuance is not. This is particularly true since the median stuent in econ 101 is really not into it. I’m not mad about that. Most are not economics majors (though hopefully we convert a few!), they’re taking a bunch of courses at once, and time is scarce. They need to get through the course as best they can, and sometimes that means sketching supply and demand diagrams and getting the hell out of there.

Those diagrams are memorable too. I bet plenty of former econ 101 students would be a bit fuzzy on their class discussions but would recognize a supply and demand diagram a mile away. I am quite serious when I say that if we had diagrams for any market failure topic that were as ubiquitous as the supply and demand diagram, half of our economism problem would not exist.

So: efficiency and deadweight loss are poorly critically understood by the median student, but the words and the pictures stick. Economics is about efficiency? How can I be mad at someone who thinks that after econ 101? It’s baked in. I think the dollar-utilitarian ethics of efficiency are an absolutely crucial, maybe more subtle, facet of economism.

So everyone gets to be right here and everyone gets to suffer. Econ 101 includes lots of rich material, but there is at least potential economism in even the most well-meaning textbooks, teaching, and discourse. I doubt that many econ 101 courses are as thoughtful and holistically valuable as the Wolfers version, but nor would I be surprised if some of his former students were to practice Kwak’s economism. The language is the thing. Whether it’s the words themselves or the ethics they suppress, the pictures themselves or the assumptions they hide, the course we deliver is not the course that’s received. It never is, of course, but the differences here are, I think, predictable, systematic, and sad.