According to the Department of Homeland Security, there are more than 13 million legal permanent residents in the United States. I’m one of them. U.S. politics matters a lot to me, since this is where I live my life, but my fellow green card holders and I have no vote with which to express our opinions on the future of our home country. Perhaps you can imagine how frustrating that is.

The question is whether the political preferences of legal permanent residents are reflected well in the outcome of elections in which they cannot vote. In my opinion it’s probable that the 2016 presidential election would have had a different result in a world in which permanent residents were franchised rather than being electoral collateral damage.

The Electoral College coalition that won the presidency for the Republican nominee was disproportionately rural, old, and white. I suspect, based on my reading of this Migration Policy page and this DHS report, that the characteristics of legal permanent residents are quite different. I would expect them to be more urban, younger, and less white than the Republican coalition. Immigrants, tautologically, have been exposed to a variety of culture and experience.

It’s well understood that the Electoral College and the Senate privilege rural and suburban areas over cities. To the extent that legal permanent residents are less rural than the voting population, the rural skewing effect will be magnified, further alienating cities from the outcome of elections.

This is not just a simple matter of the ever-contingent life of an immigrant being destabilized by the use and abuse of immigration policy as a political football. Elections reach every facet of our existence as residents, workers, taxpayers, and members of communities in our country, just as they reach every facet of the existence of citizens.

We see a relatively large share of immigrants in the middle age groups, old enough to vote, but younger on average than the most robust age group in the Republican presidential coalition.

Here is data on the country of birth and U.S. state of residence for the permanent resident population:

Notice that even the number of legal permanent residents who are eligible to naturalize is larger in many states than the president-elect’s margin of victory. This includes the crucial states of Michigan and Pennsylvania, where Hillary Clinton lost by a combined ~55,000 votes, but also Arizona, Florida, and Texas(!). We also know that people in other countries overwhelmingly favored Clinton, and legal permanent residents are, after all, also people from other countries.

There are plenty of reasons why even the 2.5 million popular vote advantage for Hillary Clinton cannot fully capture the minority nature of the win for the Republican candidate this year. For one, the demise of the Voting Rights Act, felony disenfranchisement and racial disparities in criminal justice, and the higher opportunity cost for low income voters to get to the polls all favor Republicans. Data on the preferences of nonvoters in 2012 lend credence to this general idea: 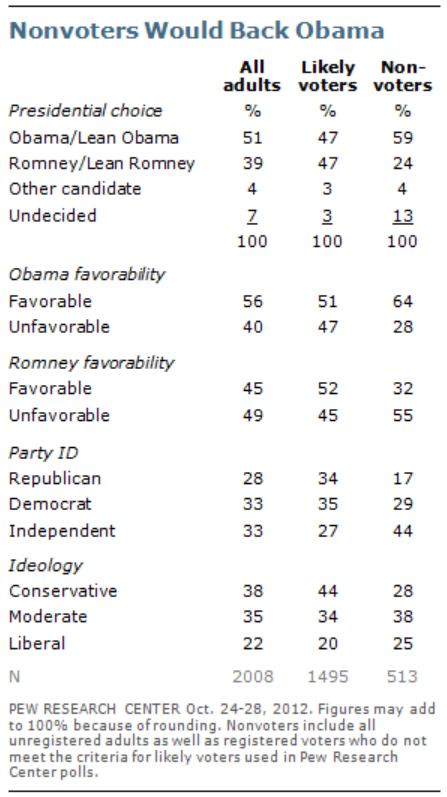 The preference for Clinton among young voters suggests also a minority rule effect on those who would otherwise be eligible but are too young to vote.

But having said all this, I don’t know of any poll of the presidential preference of legal permanent residents. Perhaps my conjectures are all wrong and we would have delivered a resounding popular vote victory to the president-elect. In any case though, whether or not permanent residents are part of this general understatement of the nature of the minority win in the 2016 election, it is certainly true that our real and valid humanity is not reflected electorally.

Let me end on a more personal note. I share the (immigrant’s) opinion, expressed by Khizr Khan at the DNC, that Section 1 of the 14th Amendment is the most remarkable one: “nor deny to any person within its jurisdiction the equal protection of the laws”. For me, if I am not convinced that you are willing to stand up for that value, nothing else you can offer will make up for it.

It’s not a coincidence that people of color and the LGBTQ community, for example, overwhelmingly opt to join the Democratic coalition. There is no true comparison since I’m white and relatively well-off, but as an immigrant I have tasted a small measure of marginalization. I want to see power exercised for those who have little power, not against them. That’s why in the end I suspect the voice of legal permanent residents could have swayed the election.